Whirling Log symbol of Native American tribe Navajo is Vedic Swastika, 卐. Used in Judaism, Christianity, Islam, Buddhism, Jainism, Tibet, China, Japan, Greece, Aztec, Ceylon, Hopi, Celt, Bali, Malta, Lapland etc.
Swastika is known to be in use atleast since 12000 years, when it was found on a late paleolithic figurine of a bird, carved from mammoth ivory, which was found in Mezine, Ukraine (11000 – 13000 years old).
In sanskrit, su- meaning “good, well” and asti “it is“, which form the word swasti, meaning good health or good fortune; the added suffix ka forms an abstract noun, and swastika might thus be translated literally as “that which is associated with well-being“, corresponding to “lucky charm” or “thing that is auspicious“.
Swastika appears as a cross with branches bent at right angles, pointing in a clockwise direction. In essence, it represents well-being for all, and the circular nature of its points represents the repetitive nature of reincarnation, and also indicates the all-pervasiveness of the Absolute and the eternal nature of the Brahman, the spiritual dimension. If you draw a circle around it, it also symbolizes the Sun-god, Surya, as the ultimate source of light, heat and the energy of the universe that flows in all directions.

Four branches of the Swastika represent the fourfold principles of divinity, which include :
1) Brahma, as the four-faced secondary creator of the universe who spreads the sacred knowledge in four directions;
2) Four Vedas, namely the Rig, Sama, Yajur, and Atharva;
3) Four targets of life or Purusharthas, namely, Dharma (righteousness or sacred duty), Artha (acquiring wealth), Kama (fulfilling desires), and Moksha (liberation from any further cycles of birth and death); 4) Four ashramas of life which make the latter possible, namely Brahmacharya (student life of self-control), Grihastha (house-holder life), Vanaprastha (retired), and Sannyasa (life of renunciation).

Swastika in All Religions and Cultures

Other religions and cultures have also adapted Swastika and regarded it very highly.
Buddhists consider it as the symbol of the genesis of all flora. Jains also draw the Swastika in front of their deities when making offerings to them. In antiquity, the swastika was used extensively by Hittites, Celts and Greeks, among others.
It also occurs in other Asian, European, African and Native American cultures sometimes as a geometrical motif, or sometimes as a religious symbol.

Among native americans, whirling log was used by many southwestern tribes, most notably the Navajo. Among different tribes the swastika carried various meanings. To the Hopi it represented the wandering Hopi clans; to the Navajo it represented a whirling log ( tsil no’oli’ ), a sacred image representing a legend that was used in healing rituals.
Whirling Logs are used in Navajo sand paintings during a healing or other type of ceremony.
A sand painting is supposed to be a temporary piece of art which is destroyed after the ceremony is over. However sand painting designs are also used in prints and framed paintings, rugs and on jewelry.
The Whirling Log symbol is associated with a narrative involving a man (sometimes called the Culture Hero) who takes a journey down the San Juan River in a hollowed out log canoe. During his adventure, he encounters whirlpools and a special event where the San Juan River meets the Colorado River.
There he comes upon a whirling log or cross with Yei figures seated on the cross. From the yeis he learns much knowledge which he takes back to his people. 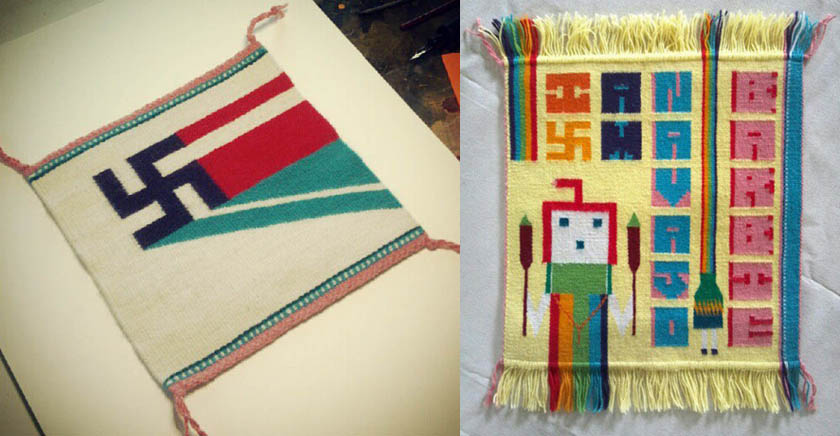 The Whirling Logs, or Tsil’ol-ni, story occurs in both the Night Way and Feather Way, as well as another version that occurs in the Chiricahua Wind Way. The hero of the story, named Self Teacher, decides to leave home because his family is angry at him for his gambling losses. So he sets out on a long journey.
At first the gods try to persuade him not to go. But seeing his determination, they help him hollow out a log in which he travels down the river with his pet turkey (which followed him to the river bank, as do the gods). He and his craft are captured by Water Monster, who carries him down beneath the waters of the river to the home of the Water People. The gods have difficulty rescuing him until Black God threatens to set fire to Water Monster’s home, forcing him to release the hero. Before the hero is released, Frog teaches Self Teacher how to cure the illnesses caused by the Water People. When Self Teacher’s whirling log finally arrives at the lake (or in some versions, a whirlpool) that was his destination, Talking God, Hastye Hogan, and two Biighaa’ask’idii rescue him.
The final surprise comes when the hero is reunited with his pet turkey, which shakes its wings, releasing the seeds put there by the gods. Self Teacher then plants a field of crops that quickly ripen for harvest. He returns home to share the knowledge of farming that he has gained and the cures that he has learned. 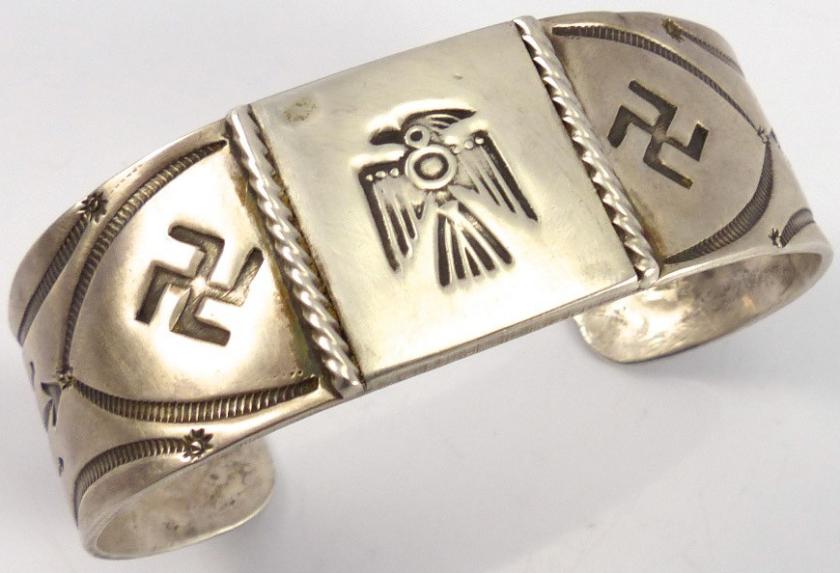 Swastika symbol gained bad reputation when it was used by Hitler as a symbol of Nazi (Hakenkreuz Symbol).
He did so because ancient Indians used it and he believed that Aryans were the Germans ancestors, and swastika had been “eternally anti-Semitic.”

Although all swastikas are bent crosses based on a chiral symmetry, they appear with different geometrical details: as compact crosses with short arms, as crosses with long trailing arms and as motifs in a pattern of unbroken lines.

Chirality describes an absence of reflective symmetry, with the existence of two versions that are mirror images of each other. The mirror-image forms are typically described as:

The left-facing version is distinguished in some traditions and languages as a distinct symbol from the right-facing “swastika“, and is more correctly called the “sauwastika” or “sauvastika“.

The compact swastika can be seen as a chiral irregular icosagon (20-sided polygon) with fourfold (90°) rotational symmetry. Such a swastika proportioned on a 5 × 5 square grid and with the broken portions of its arms shortened by one unit can tile the plane by translation alone. The Nazi swastika used a 5 × 5 diagonal grid, but with the arms unshortened.
Sauwastika were adopted as a standard character in Sanskrit. “卍” (pinyin: wàn) and as such entered various other East Asian languages, including Chinese script. In Japanese the symbol is called “卍” (Hepburn: manji) or “卍字” (manji).

Swastika has also been adapted into Sufism, followers respect both Hinduism and Islam.