Khazars were descendants of the Turkic tribe, known as the Huns or Hun, that invaded and savaged Europe from Asia around AD 450. 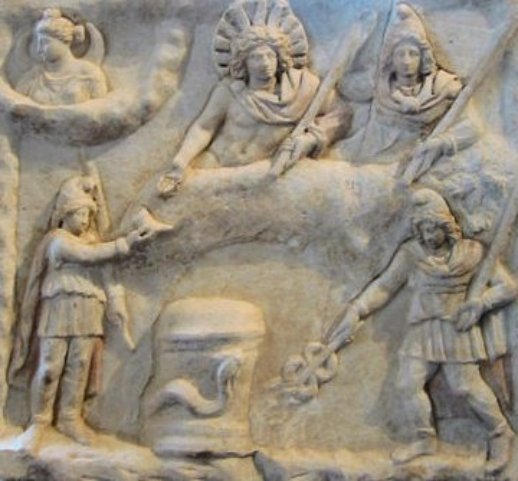 Khazars (Turkish: Hazarlar, Tatar: Xäzärlär, Hebrew: כוזרים (Kuzarim),Arabic: خزر‎ (khazar), Russian: Хазары, Persian: خزر‎, Greek: Χάζαροι, Latin: Gazari/Cosri/Gasani) were a semi-nomadic Turkic people who created what for its duration was the most powerful polity to emerge from the breakup of the western Turkish steppe empire, known as the Khazar Khanate or Khazaria.
Their influence in Eastern Europe extended well into the countries we now know as Poland, Czechoslovakia, Austria, Hungary, Romania and Bulgaria . The Khazars were once worhippers of the Siva Lingam, before they became Jews. (We can notice worship of Siva Lingam wrapped by snake, being worshipped with water etc)

Around 740 AD, Bulan, the King of Khazaria, adopted the religion of Judaism and the whole nation followed him.
Their home was not the Dead Sea, but the Caspian Sea, which became known as the `Khazar Sea’.
Khazaria long served as a buffer state between the Byzantine empire and both the nomads of the northern steppes and the Umayyad empire, after serving as Byzantium’s proxy against the Sasanian Persian empire. The alliance was dropped around 900. Byzantium began to encourage the Alans to attack Khazaria and weaken its hold on Crimea and the Caucasus, while seeking to obtain an entente with the rising Rus’ power to the north, which it aspired to convert to Christianity.
Between 965 and 969, the Kievan Rus ruler Sviatoslav I of Kiev conquered the capital Atil and destroyed the Khazar state.

Seal discovered in excavations at Khazar sites is the Jewish ‘Star of David‘.
Khazars were instrumental in the creation of the Magyar homeland of Hungary. Names like the Russian Cossack and the Hungarian Hussar came from ‘Khazar’, as did the German for heretic, Ketzer.
An ancient traditional pre-Christian account of Hungarian origins says they are the descendants of the Babylonian Nimrod.
The legend claims that Nimrod had two sons, Magor and Hunor.
It is said that Magor was the ancestor of the Magyars and Hunor was the ancestor of the Huns, so providing the common origin of the Magyars and the Huns (Khazars).

Over the centuries of waning power and influence, the Khazar peoples began to emigrate in many directions. The Khazar ‘Jews’ were confined to ghettos as a result of papal dictat in the mid-16th century.
After the demise of Khazaria, the Ashkenazi did not speak the Semitic language of Hebrew at all because they were not original Hebrews.
They developed their own tongue called Yiddish, whch is the language of the Ashkenazi, and it did not come from Israel, but from Germany and Eastern Europe.

Khazars originally practiced a traditional Turkic form of cultic practices known as Tengriism, which focused on the sky god Tengri. (Similar to Mongolian Blue Sky God Koke Mongke Tengri. )
Rites involved offerings to fire, water, and the moon, to remarkable creatures, and to “gods of the road” (Old Türk yol tengri, perhaps a god of fortune). Sun amulets were widespread as cultic ornaments.
A tree cult was also maintained. Whatever was struck by lightning, man or object, was considered a sacrifice to the high god of heaven. The afterlife, to judge from excavations of aristocratic tumuli, was much a continuation of life on earth, warriors being interred with their weapons, horses, and sometimes with human sacrifices: the funeral of one tudrun in 711-12 saw 300 soldiers killed to accompany him to the otherworld. Ancestor worship was also observed (similar to Pitru Devatas in Vedic Religion).

In 965 AD, as the Qağanate was struggling against the victorious campaign of the Rus’ prince Sviatoslav, the Islamic historian Ibn al-Athîr mentions that Khazaria, attacked by the Oğuz, sought help from Khwarezm, but their appeal was rejected because they were regarded as ‘infidels‘ (al-kuffâr:pagans). Save for the king, the Khazarians are said to have converted to Islam in order to secure an alliance, and the Turks were, with Khwarezm’s military assistance repelled.
It was this that, according to Ibn al-Athîr, led the Jewish king of Khazar to convert to Islam.