UFO like Aircraft and Parachute usage was done by King of Salwa during a war againt Krishna at Dwaraka. Mayasura built this hitech Saubha Vimana with Iron.
Salwa is one the western kingdoms in the epic Mahabharata. It is close to Madra Kingdom (modern day Sialkot, Pakistan).
The famous Savitri and Satyavan, who survived death from Yama, were from Salwa Kingdom. Their capital was named Saubha.
One of the Salwa King, contemporary to Krishna, attacked Dwaraka with one of the most advanced aircraft during those times. 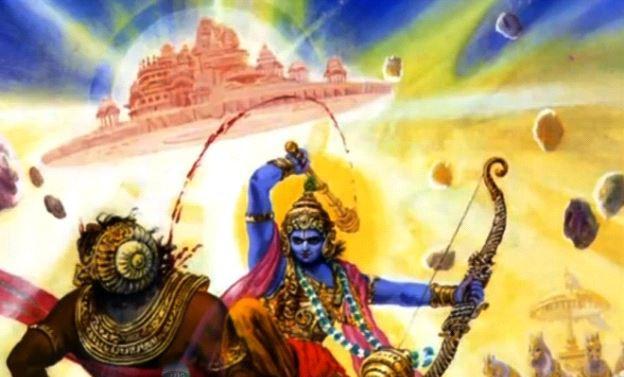 The sanskrit term Vimana, is not actually the modern day airplane. Its descriptions match with UFO, as they had no conventional engines or wings.
Salwa King has requested an extremely high-tech aerial vehicle which can help him destroy the city of Dwarka and kill his hated enemy, Lord Krishna.
The accomplished engineer Maya Danava fulfills Salwa’s request.

Salwa asked for a Vimana that could not be destroyed by Devas, Asuras, humans, Gandharvas, Uragas nor Rakshasas, that could travel anywhere he wished to go, and that would terrify the Varishnis.
Lord Siva said, ‘So be it.‘ On his order, Maya Danava constructed a flying vehicle made of iron named Saubha, and presented it to Salwa King.
Delighted with his new wonderful and powerful aircraft, the wicked King of Salwa gathers his army and heads for the city of Dwaraka to attack Krishna.

Translation : This unassailable vehicle was filled with darkness and could go anywhere. Upon obtaining it, Salva, remembering the Varishnis’ enmity toward him, proceeded to the city of Dwarka.

Salva besieged the city with a large army, decimating the outlying parks and gardens, the mansions along with their observatories, towering gateways and surrouding walls, and also the public recreational areas.

Translation : The city of Krishna thus terribly tormented by Saubha could, just as the earth with Tripura, find no peace.

From his excellent vimana he threw down a torrent of projectiles. A fierce vortex arose and blanketed the entire area with billowing dust.
When Salwa saw Krishna’s chariot on the battlefield, he thereupon released a great and powerful weapon which “flew through the sky with a roaring sound like a great meteor“. Bhagavatam describes it as being so bright that it literally “lit up the entire sky“.
This sounds a lot like a blazing rocket!
As Krishna began his counterattack, Salwa engages the special powers of his vimana in an all out effort to avoid destruction.

Description of Battle between Salwa King and Dwaraka Warriors (Vrishnis)

Pradyumna seeing how His subjects were being harassed then said to them: ‘Do not fear!‘, after which the great hero, who was of an untold glory, mounted His chariot. Eminent leaders among chariot heroes like Sâtyaki, Cârudeshna, Sâmba, Akrûra and his younger brothers, Hârdikya, Bhânuvinda as also Gada, S’uka, Sârana and other bowmen, came forward [from the city] in armor, being protected by chariotry, elephantry, cavalry and infantry.
Thereupon a hair-raising battle commenced between the Yadus and the followers of Salwa, that was as tumultuous as the battle between the demons and the demigods.
The way the warm rays of the sun dissipate the darkness of the night, by the son of Rukminî with His divinely empowered weapons in an instant the magical tricks were destroyed of the master of Saubha.
With twenty-five iron-tipped, in their joints perfectly smoothened arrows with golden shafts He struck Salwa’s commander-in-chief [Dyumân].
With a hundred of them He pierced Salwa, with one shaft He pierced each of his soldiers, with ten shafts he pierced each of his charioteers and with three shafts he pierced each of his carriers [elephants, horses]. When they saw that amazing, mighty feat of Pradyumna, the great personality, He was honored by all the soldiers of His side and the side of the enemy.

The magical illusion created by Maya that then was seen in many forms, next seen in a single form and then again was not seen at all, constituted an inconstancy that made it impossible for his opponent to locate him.
Moving hither and thither like a whirling firebrand the airship of Saubha never stayed in one place; from one moment to the next it was seen on the earth, in the sky, on a mountain top or in the water.
Wherever Salwa with his soldiers appeared with his Saubha ship, at that spot the arrows were aimed by the army commanders of the Yadus.
Salwa lost his grip because of his enemy, for his army and fortress had to suffer from the arrows shot that, striking like fire and the sun, were as intolerable as snake poison.

Even though the heroes of Vrishni, eager for the victory here and in the hereafter, were extremely pained by the floods of weapons launched by the commanders of Salwa, they did not leave their positions.
Salwa’s companion named Dyumân who was previously hurt by Pradyumna, then positioned himself before Him with a club of maura iron and struck Him with a powerful roar.
Pradyumna, the subduer of the enemies, received a full blow in the chest. His chariot driver, the son of Dâruka, knew what his duty was and removed him from the battlefield.

Translation : As Salwa with great force was attacking him with torrents of weapons, pierced Lord Krishna unerring in his prowess, with his arrows his armor, bow and crest-jewel and smashed the Saubha-Vimana of his enemy with his weapon.

Translation : Shattered into thousands of pieces by Lord Kṛishna’s thousands of weapons, the Saubha Vimana plummeted into the water. Sensing the danger Salwa King abandoned it, jumped on to ground, took up his weapon and rushed toward Lord Krishna.

Obviously, Salwa King will not jump from mid air and land on ground safely. He saw Krishna using multiple missiles to destroy his Vimana and took a parachute like equipment to safely land of ground, abandoning his burning Vimana.
Krishna, first attacked his arm with an arrow and then used his disc weapn, Sudarsana Chakra, to behead Salwa King.

The description of Salwa King’s Vimana is more like an UFO, as it flew with unmatched speed and was at different places within few seconds.
Also, the weapons used during this war looked to be missiles, which created lot of destruction.

Description of Saubha Vimana and its Technology by Modern Scientists