Dinosaur was mentioned to have been witnessed by yadava boys during Krishna’s regime in dwaraka around 3100 BCE. 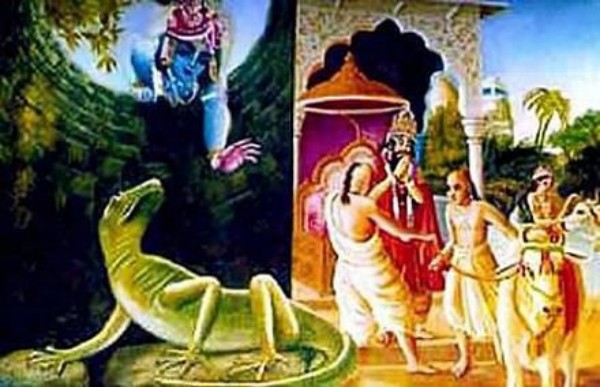 Bhagavatam, written by sage veda vyas describes about a huge hill sized lizard (chameleon) in canto 10, chapter 64.
One day Samba, Pradyumna, Caru, Bhanu, Gada and other young boys of the Yadu dynasty went to a small forest to play.
After playing for a long time, they became thirsty. As they searched for water, they looked inside a dry well and saw a peculiar creature.
The boys were astonished to behold this creature, a lizard who looked like a hill. They felt sorry for it and tried to lift it out of the well.
They caught on to the trapped lizard with leather thongs and then with woven ropes, but still they could not lift it out. So they went to Lord Krishna and excitedly told Him about the creature.
Krishna fetched him out of well and the dinosaur reveals its identity as King Nriga, who was son was Ikshvaku.
Nriga was ancestor of Rama, who also belonged to Ikshvaku dynasty.

Nriga narrates his story as : I gave in charity many cows to a brahmin, but one cow returned to its herd without my knowledge.
Unaware of this, I proceeded to give that cow in charity to a different brahmin.
At this time, the cow’s original owner came there and claimed, ‘This cow is mine!’ The second brahmana responded, ‘No. She is mine. Nriga gave her to me.’

While arguing in this way, the two brahmanas approached me. When they accused me of giving for a second time a cow that I had already given in charity, thus committing a greatly sinful act, I became bewildered.
Finding myself in such a terrible dilemma, I humbly entreated, ‘O brahmanas, please be merciful to me, for I am your servant, and had acted innocently, without knowing what I was doing. I will give each of you 100,000 of the best cows, in exchange for this one disputed cow, and thus rectify my mistake. Please accept my offer and thus save me from this difficult situation, or I shall surely fall down into hell.’

The second owner of the cow said, ‘I don’t want anything in exchange for this cow’ and the original owner said, ‘I will not accept even more than what you are offering.’
Both thought that the cow was theirs, and thus could not be taken back under any condition. While considering that their rightful position had been usurped, the two brahmanas angrily left my palace and returned home.

At the time when I gave up my body, and then Yamaraja said, ‘My dear King, which would you like to experience first? Would you like to enjoy the results of your pious acts, or would you first like to suffer the results of your sins? I can see no limit to the charity that you had given, or the enjoyment in heaven that you will consequently receive.’

Being bewildered, I replied, ‘My lord, first of all let me suffer for my misdeeds.’ Yamaraja responded by saying, ‘Then fall!’ and at once, I was transformed into a lizard and remained within a well for a long time. But somehow, due to my charitable disposition toward the brahmanas, and my great desire to one day have Your audience, I continued to think of You, even in my degraded condition, and I could remember everything about my past life.

Krishna then sent him to heaven.

This story of King Nriga(Nruga) reveals that ancient indians knew and even saw dinosaurs (hill sized lizards) around 5000 years ago.