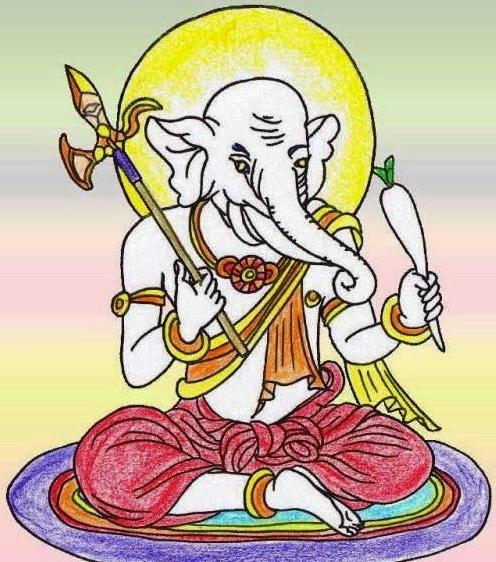 Ganesha or Kangi-ten (歓喜天) is a god in Shingon & Tendai schools of Japanese Buddhism. Legends behind Soshin Kangi-ten (Male & Female embraced form), Evil Vinayaka, Saraswati (Benzaiten), Bishamonten (Kubera) etc.
He is the Japanese Buddhist form of Ganesh and also sometimes identified with the bodhisattva Avalokiteshvara (one who listens to cries of sentient beings who need help).
Kangiten is also known as Kanki-ten (ten means God or Deva), Shō-ten (聖天, ‘sacred god‘ or ‘noble god’), Daishō-ten (‘great noble god‘), Daishō Kangi-ten (大聖歓喜天), Tenson (天尊, ‘venerable god‘), Kangi Jizai-ten (歓喜自在天), Shōden-sama, Vinayaka-ten or Binayaka-ten (毘那夜迦天), Ganapatei (誐那缽底) and Zōbi-ten (象鼻天).
Ganesha or Vinayaka is said to be always in Turiya (तुरीय) Sthiti, which is the 4th and Blissful state of mind.
The other 3 states are waking consciousness, dreaming, and dreamless sleep, which are usually common states of consciousness and Turiya transcends these three states.
This matches with Kangiten being God of Bliss.
Also known as Gaṇabachi or Gaṇapati (Ganapati is a popular epithet of Ganesha) and Gaṇwha (Ganesha). Like Ganesha, Bināyaka is the remover of obstacles, but when propitiated, he bestows material fortunes, prosperity, success and health.

History of Kangiten in Japan

Kangiten first emerged as a minor deity in the Japanese Buddhist pantheon in the eighth-ninth centuries CE, possibly under the influence of Kukai (774–835), the founder of Shingon Buddhism. The Hindu Ganesha icon travelled to China, where it was incorporated in Buddhism, then journeyed further to Japan.
Kangiten’s early role in Shingon, like most other Hindu deities assimilated in Buddhism, is of a minor guardian of the twin mandalas. Later on, Kangiten emerged as besson, an independent deity. Kangiten appears in numerous Japanese besson guides, compiled in Heian period (794–1185). While it includes rituals and iconographic forms like the early Chinese texts, it introduces origin myths of the deity to justify the Buddhist nature of the Hindu Ganesha.
Early images show him as with two or six arms. The paintings and gilt-bronze images of the Dual Kangiten with explicit sexual connotations emerged in the late Heian period, under the Tantric influence of Tibetan Buddhism where such sexual imagery (Yab-Yum) was common. The rare Japanese sexual iconography was hidden from public eye, to abide with Confucian ethics.
Kangiten has now become an important deity in Shingon.

The Dual Kangiten icon called Soshin Kangi-ten (“dual-bodied god of bliss”) is a unique feature of Shingon Buddhism. It is also called Soshin Binayaka in Japanese, Kuan-Shi ten in Chinese and Nandikeshvara (Not Nandi) in Sanskrit.
represented as an elephant-headed male and female pair, standing embracing each other.
The genders of the pair is not explicit, but hinted in the iconography. The female wears a crown, a patched monk’s robe and a red surplice, while the male wears a black cloth over his shoulder. He has a long trunk and tusks, while she has short ones. He is reddish-brown in colour and she is white. She usually rests her feet on his, while he rests his head on her shoulder.
There is no concrete evidence about the inception of this male+female Kangiten form. It is first found in Chinese texts, related to Chinese Tantric Buddhism, which was centred on the Buddha Vairocana and propagated by the three great masters Śubhakarasiṃha, Vajrabodhi, and Amoghavajra. The Dharanisamuccya translated to Chinese by the monk Atigupta (Atikuta) in 654 CE describes a ritual to worship the Dual Kangiten; the same ritual was replicated by Amoghavajra (705–774) in his ritual text Daishoten Kangi Soshin Binayaka ho. Amoghavajra describes Soshin Kangiten as a deva, who grants one’s desires and a trayaka, the protector against evil and calamity. It details rituals and mantras to gain favour of the Dual Kangiten as well as the six-armed Shoten. In another text by Amoghavajra, Soshin Kangiten is called a bodhisattva.

Rituals to appease Kangiten are described to gain three material things: kingship, prosperity and sufficient food and clothing. The text especially prescribes wine, the “water of bliss” as an offering to Kangiten.
Śubhakarasiṃha (early 8th century) in text, predating Amoghavajra but post-dating Atigupta composed in c. 723-36, equates Kangiten to Shiva and associates the Hindu king Vinayaka with Avalokiteshvara (Kannon).
The Dual Kangiten may also have been by the Hindu Tantric portrayal of Ganesha with consorts.

Legend of Evil Vinayaka in Japan

There are many Japanese Buddhist canons which narrate tales about the evil nature of Vināyaka. The Kangisoshinkuyoho as well as Śubhakarasiṃha’s early Chinese text describes that King Vinayaka (Binayaka) was the son of Uma(hi) (Parvati, mother of Ganesha) and Maheswara (Siva), father of Ganesha. Uma produces 1500 children from her either side; from her left a host of evil Vinayakas, headed by Vinayaka (Binayaka) and from her right, benevolent virtuous hosts headed by the manifestation of Avalokiteshvara – Senanayaka (Lord of the army [of gods], identified with the Hindu god of war Skanda, the brother of Ganesha), the antithesis of Vinayaka. Senanayaka would take many births as the elder brother (as in the Hindu tradition) or wife of Vinyanaka to defeat him. Then Śubhakarasiṃha’s text says that as wife, Senanayaka embraces Vinayaka leading to the icon of the Dual Kangiten. In the Japanese pantheon, Kangiten is considered as the brother of Ida-ten, idenfied with Skanda.

Another legend narrates that the king of Marakeira only ate beef and radishes. When these became rare, he started feasting on human corpses and finally living beings, turning into the great demon-king Vinayaka, who commanded an army of vinayakas. The people prayed to the Avalokiteshvara, who took the form of a female vinayaka and seduced Vinayaka, filling him with joy (kangi). Thus, he, in union with her, became the Dual Kangiten.

The Kukozensho tells that Zaijizai, Maheshvara’s consort, had a son named Shoten, who was banished from heaven, due to his evil and violent nature. A beautiful goddess named Gundari (Kundali), took the form of a terrible demoness and married Shoten, leading him to good ways. Another tale narrates that Kangiten was the evil daughter of Mahaeshvara, driven out from heaven. She took refuge at Mount Binayaka and married a fellow male-Binayaka, resulting in the Dual Kangiten icon.
Japanese variants of the legend of the Dual Kangiten emphasize that union of Vinayaka (the male) and Vainayaki (the female) transforms an evil obstacle creator into a reformed individual.
The idea behind this story indicates relation of Ganesha to Kundali (Yogic Power that resides in our body).
This Kundali or Kundalini resides as silent energy at our Mooladhara Chakra (at lower end of backbone, below the Coccyx) in form of an elephant which folded its trunk while sleeping.
This is why Ganesh, (the symbolic God) is meditated upon with his Moola Mantra to awaken Kundalini at Mooladhara.

Kangiten worship along with other Gods in Japan

Kangiten is considered to be endowed with great power. Kangiten is regarded as protector of temples and worshipped generally by gamblers, actors, geishas and people in the business of “pleasure“. Mantras are often prescribed in ritual texts to appease the deity and even to drive away this obstacle-maker. Rice wine (sake), radishes and “bliss-buns” (kangi-dan) are offered to the god.
Hōzan-ji on the summit of Mount Ikoma is his most important and active temple. Though the temple is believed to have been founded in the sixth century, it came in the limelight in the 17th century when the monk Tankai (1629–1716) made the temple’s Gohonzon, a Heian period, gilt-bronze image of the Dual Kangiten, the centre of attraction. In the Genroku era (1688–1704), Osaka merchants, especially vegetable-oil sellers, joined Kangiten’s cult, attributing their success to his worship. 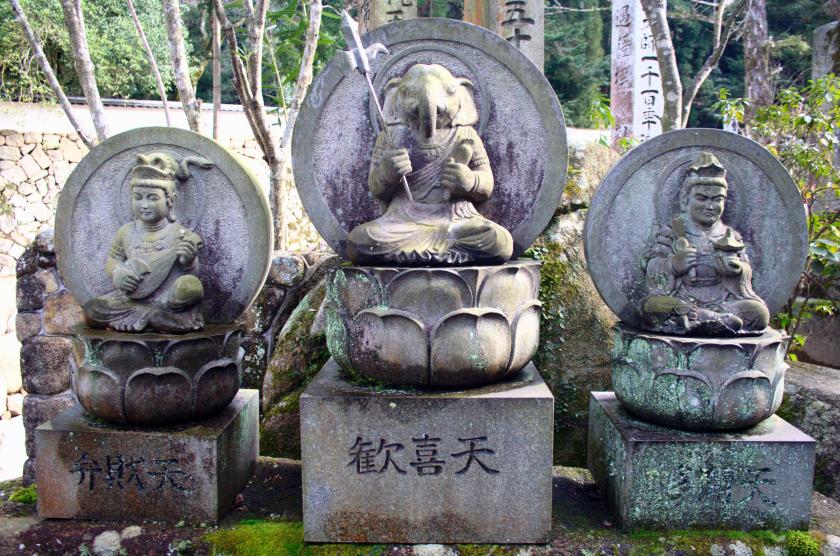