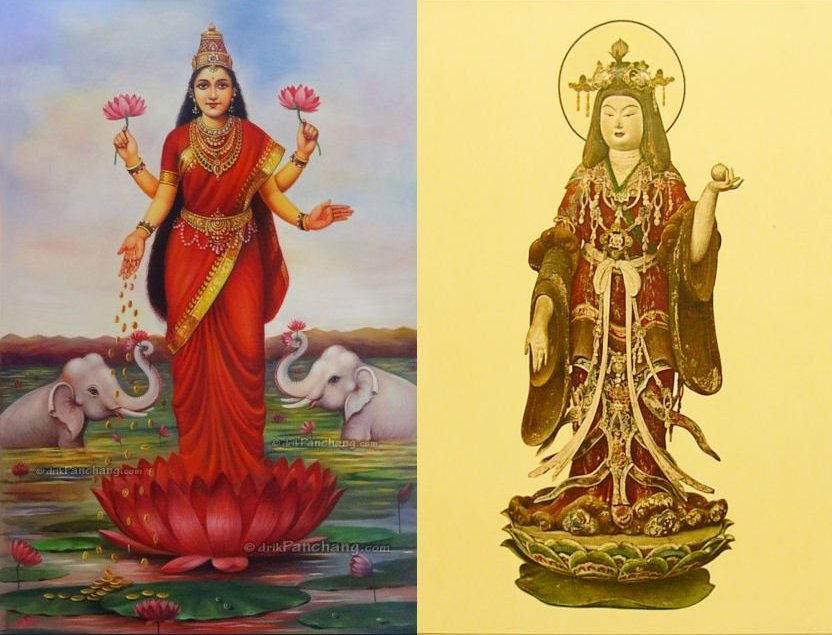 She is regarded as wife of Vishnu or sister of Bishamonten (Vaiśravaṇa or Kubera) in Buddhist myths.
In Japan she is the goddess of fertility, fortune, luck, beauty, and merit. Among some Japanese sects she was the central devotional deity, given individual status as an object of Buddhist worship, but since the 15th century, her imagery and attributes have been largely supplanted by the Goddess Benzaiten.
Painting from 8th century CE and wooden idol of 11th century were found, indicating that Kichijoten was worshipped in Japan for more than 1300 years.
She is sometimes named as one of the Seven Gods of Fortune (fukujin), replacing either Jurōjin or Fukurokuju.
She is considered to be the goddess of happiness, fertility, and beauty.
All three of the Vedic Tridevi goddesses are represented in the Fukujin list, with Kisshoutennyo or Kichijoten representing Lakshmi, Daikoku representing Parvati and Benzaiten representing Saraswati.

Buddhist painting of the Tempyo Era (710-794) exhibited at the Tokyo National Museum.
She has crescent-shaped eyebrows with full cheeks, and moves leisurely and gracefully in a striking multi-layered attire.
1078 CE Heian Era Wooden idol with pigments and left hand holding Wish-Granting nyoihoju Jewel.
Kichijoten was goddess of fertility, wealth, and beauty, who was linked to Kubera (aka Tamonten or Bishamonten), the vedic god of the North, and Vishnu the protector of Creation.
Japanese belief in Kichijouten was widespread in the Nara period (8th century CE) with her images and sculptures at Toudaiji 東大寺 (746 CE), Saidaiji 西大寺, Houryuuji 法隆寺 (748 CE), and the painted portrait at Yakushiji 薬師寺 (771 CE), were worshipped as a principal image at the kisshou keka 吉祥悔過, or New Year’s ceremony for welcoming good luck and sweeping out bad.

She is distinguished from Benzaiten 弁財天, with whom she is often confused, by the “wish-granting” jewel (nyoi houju 如意宝珠） held in her left hand, and the lotus in her right. She also makes the gesture (mudra) of charity (segan-in 施願印) with her palm open and facing downwards, much similar to Maha Lakshmi, who bestows wealth from her right palm facing downwards (Varada Mudra).
She is invoked in particular for apotropaic purposes and also for the healing of eye diseases.
here is a set of 26 paintings, all different, at Daigoji Temple 醍醐寺 in Kyoto, but generally speaking she is depicted with either two or four arms and either seated on a cloud or standing on the back of a dragon.