Historians have wrongly mixed Maurya with Chandra Gupta I. His son Samudra Gupta defeated Alexander in early 326 BCE.
Alexander III of Macedon, after conquering Asia Minor, Egypt and Persia, invaded India in 327 BCE.
He defeated few kings on the way and had troops lined up across Indus River.
At that time, the biggest empire in India was Magadha Kingdom, which was ruled by Chandra Gupta I of Gupta Dynasty. Samudra Gupta was his son and Commander-in-chief of Army. 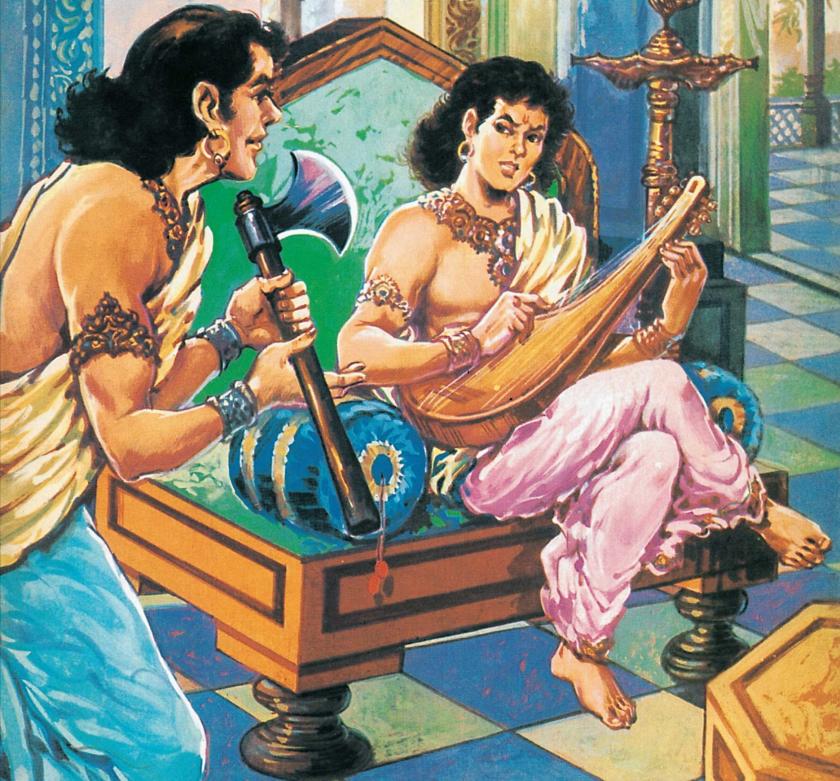 This article is a continuation of Magadha Kings History, Chanakya-Chandragupta Maurya and Andhra Kings.
Many historians have wrongly assumed that this Chandra Gupta was Chandragupta Maurya of Maurya Dynasty, who was mentored by Chanakya in 16th century BCE.
Fake historians have moved Gautama Buddha and Adi Sankaracharya ahead by 1300 years, mixed Chandra Gupta I with Chandragupta Maurya, who was 1200 years earlier and removed Vikramarka, Salivahana etc from history.
Greek historians have written that Alexander defeated Porus but no king by that name existed in Punjab history.
They also wrote that Alexander had to return because his army revolted at Beas river fearing the prospect of facing other large armies and exhausted by years of campaigning.
Fact is that, Samudra Gupta army was too huge for them and they did not even cross Indus river.
While his army feared of defeat and wanted to return, their king Alexander forced them to cross the Indus river and during this process, they were severely hit from opposite side.
This caused revolt within the army and also Alexander was injured. 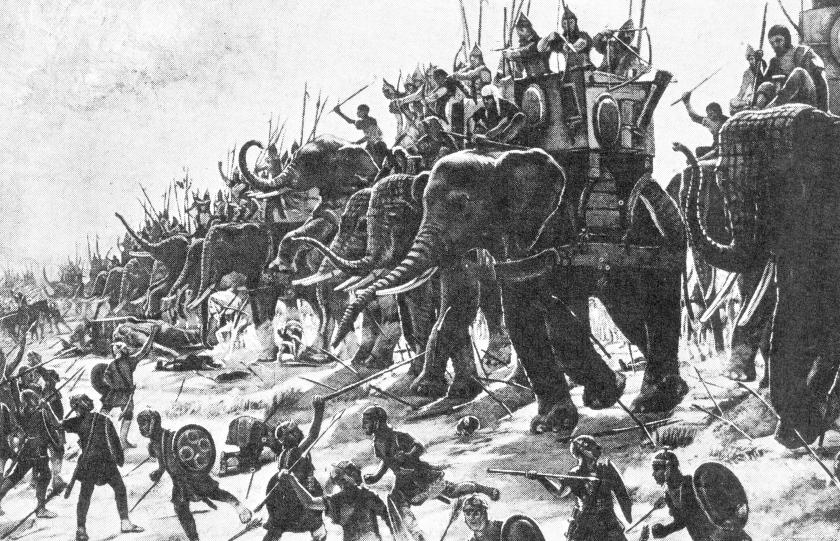 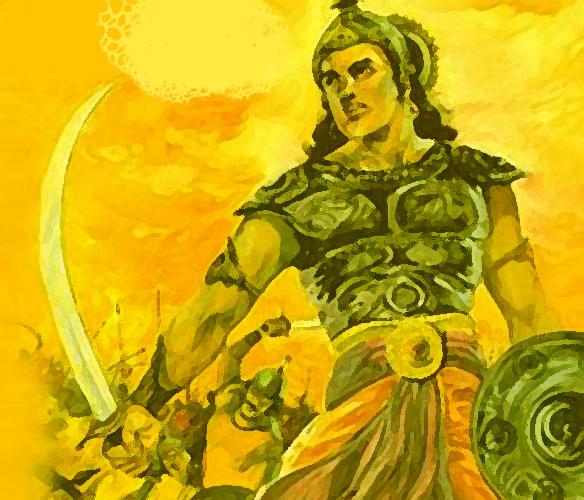 Alexander lost much of his army during this attempt and while returning, he died in Babylon kingdom with sustained injuries and sickness in 323 BCE.
During his conquering years, he left some part of the army along with a general at places where he won, so as to retain that kingdom.
After his death, all those generals declared themselves independent and ruled their own kingdoms, which later became small countries.
Greeks recorded 3 names : Xandrames, Sandrocottus and Sandrocyptus. European and Indian historians have wrongly identified the three names with Mahapadmananda, Chandragupta Maurya and Bindusara, who were born many years earlier.
Infact, Xandrames were to be identified as the Greek version of Chandramas in Sanskrit or Chandra Sri Satakarni, the last of the Andhra dynasty, and the other two, Sandracottus and Sandrocyptus, with Chandra Gupta I and Samudra Gupta of the Gupta dynasty of the kings of Magadha, that succeeded the Andhra dynasty, and were contemporaries of Alexander in 326 BCE.
Historians even missed the similarity in named of Chandramas with Xandrames and Sandrocyptus with Samudra Gupta.
These Gupta kings had the title ‘Aditya‘ annexed behind their names.
Chandra Gupta I was called Vijayaditya, his son Samudra Gupta was known as Asokaditya and so on..
This title ‘Asoka‘ was confused with Maurya dynasty king Asoka (Chandra Askoka or Asokavardhana of 15th century BCE and Asoka was recorded as to have ruled during 3rd century BCE.

Last Andhra King who ruled Magadha Empire was Chandrasri Satakarni.
Few years earlier during Siva Sri Satakarni rule, Sri Gupta, related to Nepal kings dynasty, came and settled in Pataliputra as general in army.
Later, Sri Gupta’s son Ghatotkacha Gupta took over and his son Chandra Gupta I continued as generals in army.
Chandra Sri was a mere puppet in their hands.
After death of Chandra Sri, his minor son Puloman III was made king for few days by ministers.
But under the guise of protecting the country on behalf of Puloman III, Chandra Gupta I, murdered the prince and ascended the throne of Magadha under the title of Maharajadhiraja in the year 327 BCE and made his second son Samudra Gupta as commander-in-chief of army.
So, the Gupta Dynasty originally came from Nepal.

Guptas originally belonged to the Surya Vamsi Kshatriya caste, who settled themselves as local chiefs at Sri Parvata near Nepal, from which they were known in history as Parvatiyas.
These and the Lichchavis of Vaisali were associated with the kings of Nepal. They were Kshatriyas of the Aryan Descent of Nepal. Both of them belonged to a warlike caste. The Lichchavis were chiefly noted for the beauty of their girls, and kings were proud to have them as queens.
Few of the later kings of the Andhra Dynasty had taken daughters of Lichchavis as their wives and many of the Lichchavis settled themselves in the big cities of Magadha such as Girivraja and Pataliputra.
Chandra Gupta, the grandson of Sri Gupta, by his personal valor added greatly to the dominions of the Andhra kings, and his political importance as commander-in-chief of Yajnasri Saatakarni and Vijaya Sri Saatakarni. This won for him the hand of Kumaradevi, the daughter of the king of Nepal.
But Kumaradevi was his 2nd wife. Their son was Samudra Gupta.
Chandra Gupta’s 1st wife was a princess of the Lichchavis, whose sister was given in marriage to Chandra Sri Satakarni. From this first marriage, Chandra Gupta had another son by name ‘Kacha’ or ‘Ghatotkacha Gupta’ (same name as grand father).
Queen of Chandra Sri was in love with her sister’s husband Chandra Gupta I and Chandra Gupta murdered the king Chandrasri.
Under the pretext of acting as guardian to his minor son Puloman III, and in the course of seven years, Chandragupta declared himself as Emperor.
He wanted his son Kacha to succeed him, but Samudra Gupta, marched against his father and by killing both his father and half brother Kacha, became emperor in 320 BCE.

After winning multiple wars, he employed a learned poet Harisena to compose an account of his achievements which he caused to be engraved on one of the stone-pillars set up more than a thousand years ago by Asoka, king of Kashmir, wrongly ascribed by oriental scholars to Asokavardhana, the grandson of ChandraGupta Maurya. In that pillar inscription at Allahabad, Samudra Gupta is said to have uprooted Achyuta and Nagasena, to have captured and liberated Mahendra of Kosala. Vyaghra Raja of Mahakanthara, Mantaraja of Kerala, Mahendra of Pishtapura, Swamidatta of Kottara, Damana of Erandapalla, Vishnugopa of Kanchi, Nilaraja of Avamukta, Hastivarman of Vengi, Ugrasena of Palakka, Kubera of Devarashtra, Dhananjaya of Kusthalapura, and all the other kings of the region of the South; to have exterminated Rudradeva, Matila, Nagadatta. Chandravarman, Ganapatinaga, Nandin, Balavarman, and many other kings of Aryavarta; and to have overthrown the Devaputras, Sahis, Shahanushahis, Sakas, Marundas, Yavanas, and the people of Simhala and all other dwellers in islands.
Harisena also explains Samudra Gupta’s relation with various Indigenous powers who settled themselves in the western parts of India from the frontiers of Persia, such as the Sakas, the Tusharas.

Every kingdom accepted his supremacy, but Nepal remained autonomous. Out of his regard for his maternal grandfather and meternal uncles, who were most attached to him, Samudra Gupta did not attempt to subdue that mountainous kingdom.
He was the only known king to have performed Aswamedha Yaga, after Pushyamitra or Pushpamitra (1218 – 1158 BCE) and Yudhisthira (5 February 3139 BCE).